Some positive news from the east coast, this time from the Cleethorpes Coast Light Railway, who announced on Monday:

"Cleethorpes Coast Light Railway are proud to announce the arrival today of historic locomotive ‘Bonnie Dundee’ after a complete overhaul. On long term loan to Cleethorpes from the Ravenglass & Eskdale Railway Co. Ltd, ‘Bonnie Dundee’ was built by Kerr Stuart in 1901 to operate at the Dundee Gasworks.

Rescued by preservationist Ian Fraser in the 1960s, the locomotive spent many years operating at Ravenglass before being taken out of use requiring extensive repairs. After negotiations between the two parties, a deal was drawn up that in return for the long term loan, CCLR would fully fund the overhaul of the locomotive. This has been undertaken by John Fowler Engineering of Bouth."

Given a tip-off that steam would be raised on Friday 30th April I re-arranged my working week and headed for the coast. The forecast was for showers...

A superb job has been achieved by John Fowler Engineering, gone are is the somewhat "agricultural" valve gear that was there pre-rebuild and the paint finish is almost shiny enough to see your face in. Not bad for 120 years old... 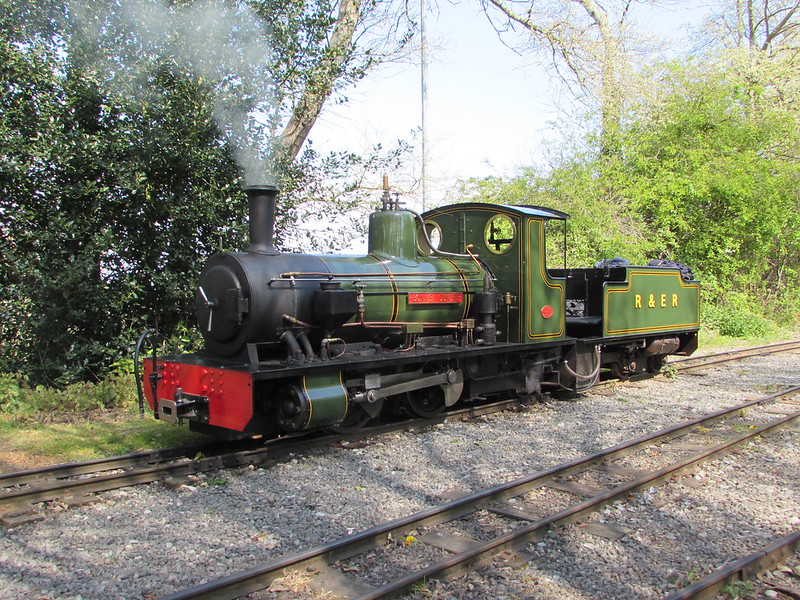 I was invited to observe a test run to Kingsway and back, the power of the loco was apparent, whilst not up to full 'Ratty' strength there is certainly enough power for anything the CCLR will need, although a run up the bank on the Humberston extension (still sadly out of use at present) will be an interesting experience. 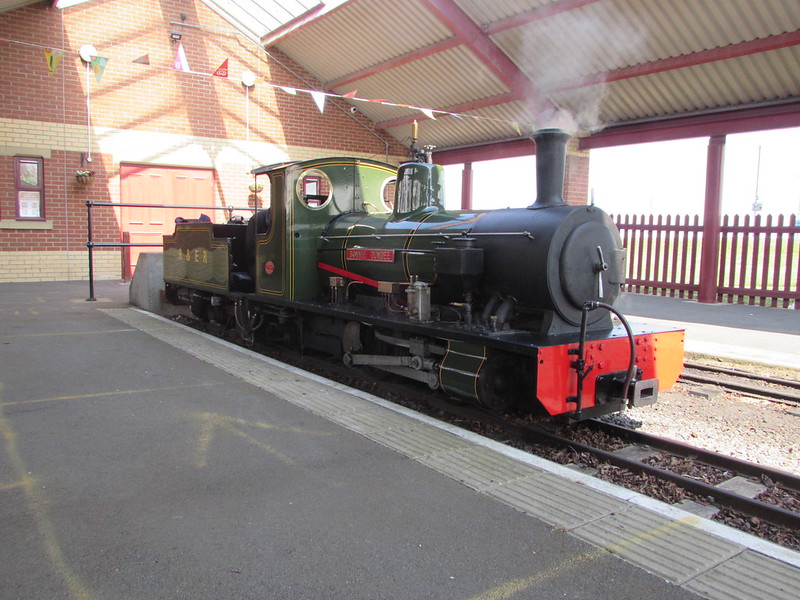 Light engine runs over, it was agreed that the next passenger departure would be steam hauled, with engineering staff observing from the train. So a few lucky members of the public got to ride the first public passenger train 'Bonnie Dundee' has hauled in may years. DA1 was included at the Lakeside end of the train in order to allow the train locomotive to be released at Lakeside loop, with DA1 drawing the train into the platform, a consequence of not running through to Humberston. 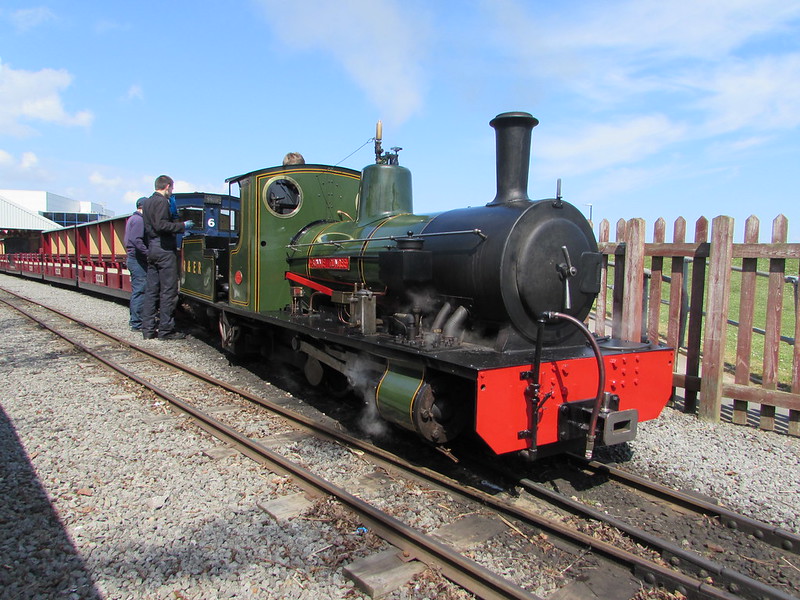 With the loco off on a second round trip I headed to the floodbank to get some shots at the lineside, it was really interesting to watch the reaction of the public on the adjacent footpath to steam being in use on a Friday afternoon. 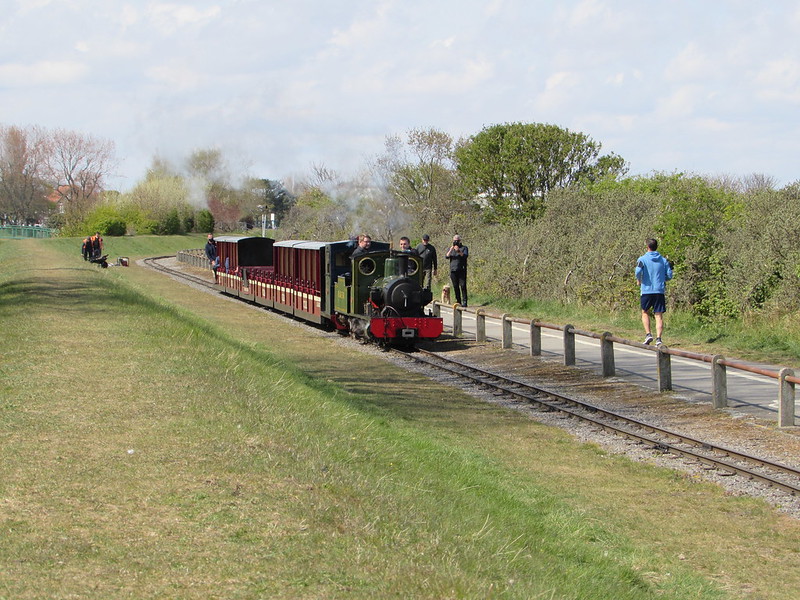 The final turns of the day were made top-and-tail with ex-Fairbourne Railway 'Rachel', which replaced DA1 at the Lakeside end of the train, 'Bonnie Dundee' shunted DA1 into the yard and then joined the Kingsway end of the train. 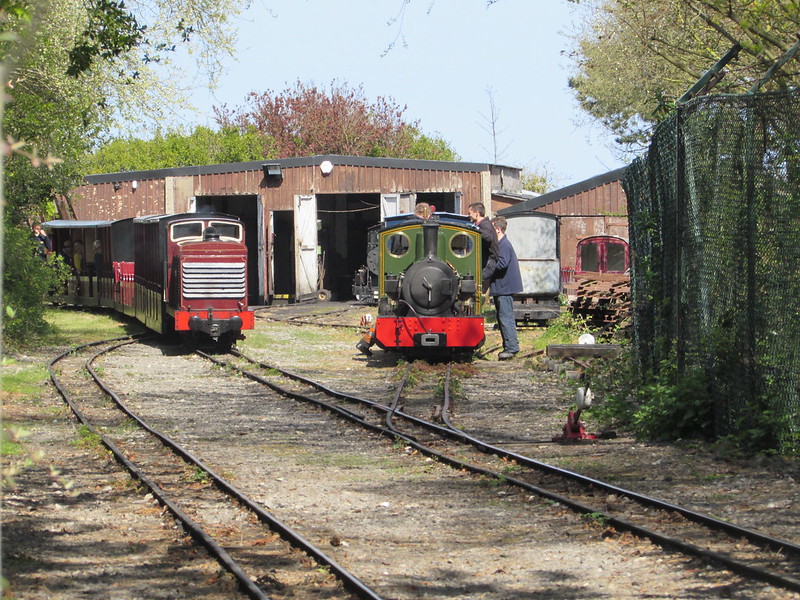 Having watched another journey depart and return, I realised that it was time to head home. I took quite a few photos, the full album is in Flickr - Bonnie Dundee Returns! You may have noticed that the weather held out, it was a real shame not to be able to enjoy a pint in the Signal Box Inn, but that can wait for another day. I didn't see any rainfall until I was reaching the top of the Wolds on my way home and then a deluge as I crossed back into Nottinghamshire.
Colin
Posted by Colin Peake at 09:00