There used to be a pizzeria locally who's trademark was square pizza. I suppose it is better box space utilisation if nothing else...

Curious I took the estate scene pizza and translated it to the same 13 x 19" board size as my 009 scene 'Old Quarry Line', retaining the 5" radius curves of the pizza but adding in a straight on each side allowing a short siding to be incorporated. 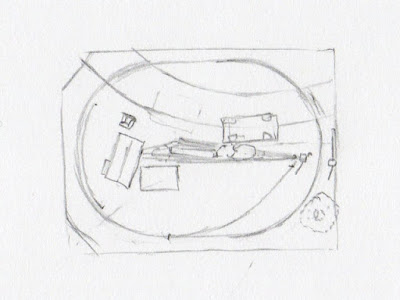 Having checked with a full size plan the siding would probably have to be curved in reality, but it just about fits. Overall the scheme reminds me of some of the micro layouts that James Hilton has built over the years, more recently in OO6.5. 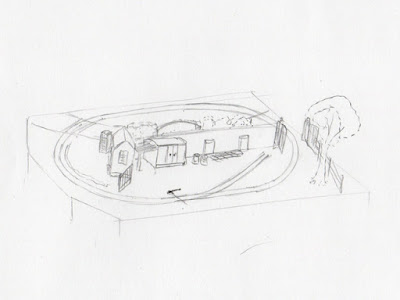 At 13 x 19" is isn't much smaller than the 15 x 24" of my stalled corkboard scheme but it seems a very different style of scene. All this thinking is leading towards how this project could be restarted and as part of that process I have revisited some older sketches made during the development of the 'Misterton Fen Tramway' scheme (another square pizza) to see how I tackled issues such as the line vanishing behind the buildings and through the hole(s) in the sky. 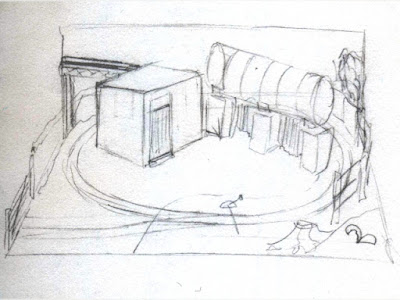 In the scheme above a tank on brick piers, and a simple block structure hide the exits. The tank was the focus of my attention, I think it was envisaged as Knightwing on scratch built piers but could easily be fully scratch built. In the scene below the all too familiar hut appears! 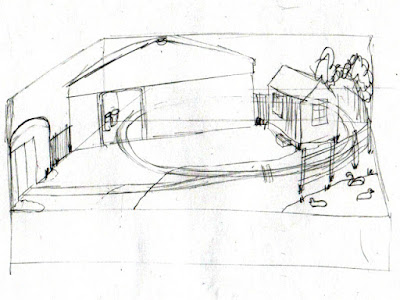 Eventually a full size mock-up was made, by this stage I had actually extended the board a little at either end. A combination of structures and trees would hide the exits reasonably well. 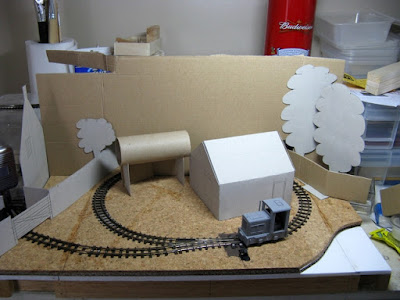 Ideas are now starting to fall into place and thoughts are turning to how the corkboard inspired scheme can be taken forward...
Colin