Planning in Paper, Pencil and Cardboard

Drawing inspiration from the old 'Misterton Fen Tramway' sketches and the more recent pizza exercises I have now sketched a few ideas for my project based on the plan of Julian Andrews brickworks layout. These initial ideas have dropped the line running through a building approach of the original. 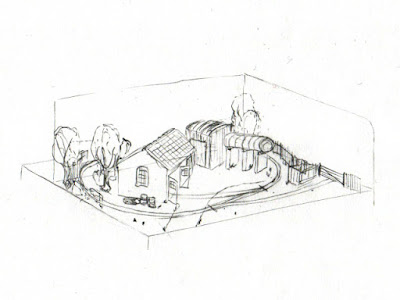 The first sketch uses a round tank on stilts very much like the one in the old sketches. The arrangement on he left hand side incorporates a workshop containing some machine tools that I have in my possession. The building would be based architecturally on the one part of the MFT that got completed - the workshop. I sold this on, due to space constraints, so it would be good to recreate it in some way. 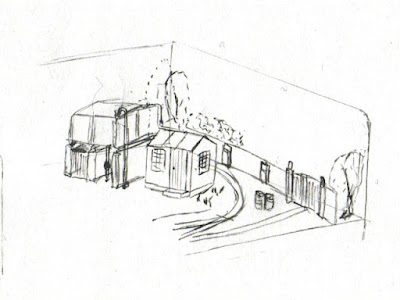 I came up with an alternative for the right hand side that used the Port Wynnstay hut and a modified Airfix/Dapol tank (on brick piers). However, my mind must be in 009 mode still, when I attempted a 3D mock-up it wouldn't quite fit as sketched and I had to adapt the idea a little. 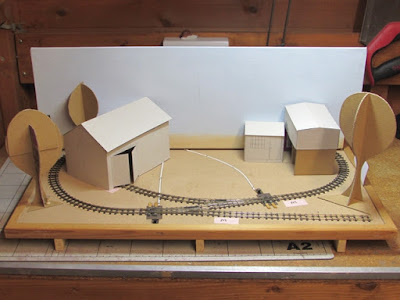 This was certainly a starting point, I had a few concerns about being able to see both lines curving away and how that might look, especially as I envisaged backscene boards both sides of the scene. Also the two trees I had in mind to use in the scene have turned out to be better background trees than foreground examples.
More soon...
Colin