Diorama Developments - To The End...

Diorama developments must go in pairs, as I was building the bench for 'Humberston' this piece of Slaters 7mm scale fence was also in the works. A relic of my childhood "attempts" at O-16.5 modelling it was covered in a dubious coat of glossy brown enamel paint. A bath in Dettol soon sorted this out and with a little cleaning up the piece was useable. 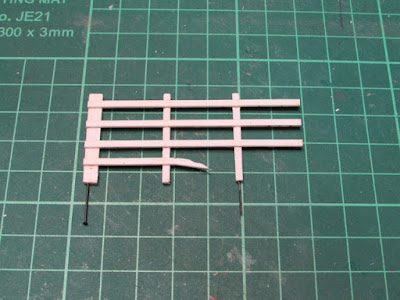 I had used a piece of this fencing on 'Stuck in a Siding', a diorama that I built a few years ago depicting a derelict 15" gauge coach, very much inspired by the 'Abandoned Miniatures' page on Facebook. I also used this scene to experiment with making a puddle in the fashion of Gordon Gravett. The coach largely hid the fence from view in normal conditions so here the diorama is seen without it. 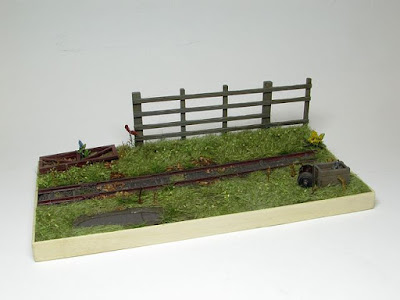 For this use I had added a woodgrain effect and distressed the planking a little to make it look a little less cared for. I did the same with the recovered section, as I wanted it to match... For in an audacious bit of diorama tinkering I have extended the originally 140mm long scene to match the 220mm of 'The Path To' and 'Humberston' (I guess that makes 220mm the new "standard" length!).
I managed to get the fence to join neatly enough to fill the gaps, touch in the paint finish and add diagonal joins in the cross-members. The actual join is nearly invisible. The junk pile has been moved and supplemented with a few extra pieces including an A1 Models bonnet front. I have managed to match the hanging basket liner ground cover from the original piece, as well as adding areas of Martin Welberg weed tufts and some longer Peco tufts. To give extra variety I added some rock outcrops at the back from home-made plaster castings and concrete area in the foreground, simply card covered with Green Scene concrete texture paint, and then weathered. 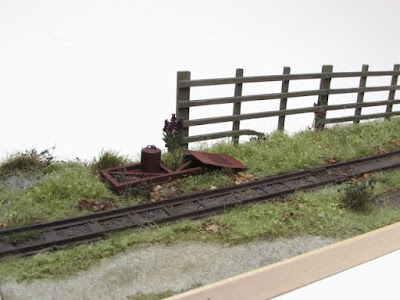 The plan had been to add the skip frame flat wagon seen in a previous posting, but late on in the process I had a rethink and decided to rebody it (again!). A few years ago I built a representation of the Sherwood Forest Railway' s skip framed open wagon on a much modified RCL skip frame hiding a Peco chassis (and undersized wheels) underneath. A bit on the featherweight side it has never really been used, and at the diorama viewing angle the undersize wheels were too apparent so I have transferred the body to the the more accurate chassis. The real wagon lacks the central bar along it's length so this was also removed. The Black Dog adaptor and flat wagon body have been transferred to the chassis prepared last year as a scenic item with broken axleboxes - waste not want not! 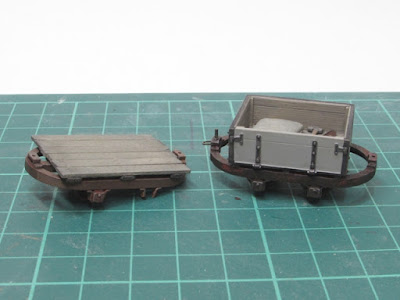 With the wagon in place on the diorama with the original carriage the revised scene is completed, new basswood strips were added front and back to hide the join in the MDF base and with this the opportunity taken to rename the diorama 'To the End'. 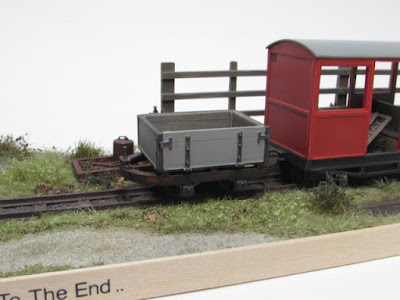 An investigation has been launched into the whereabouts of the missing full stop! It was there when I put the letters on... The overall result is (I feel), a much better balanced scene than the original. 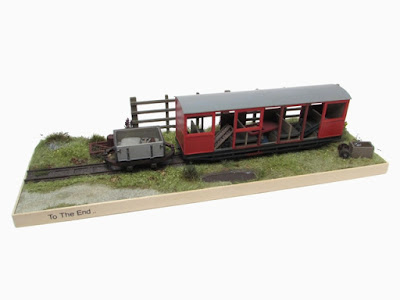 I may yet add a figure to the scene, as with 'Humberston' this helps with scale, the perils of being a multi-scale modeller!
Colin
Posted by Colin Peake at 10:01

Email ThisBlogThis!Share to TwitterShare to FacebookShare to Pinterest
Labels: Avalon Line, Diorama, O9 modelling, Stuck in a Siding, To The End