It's starting to look all white...

A little progress on the Christmas pizza. I have been slowly applying filler around the edges of the board, then inside the track but not over the central area. The central area has had a coat of a mix of the same filler but mixed about 4:1 with PVA in the hope this can avoid any cracking over the softer base. Everything is largely thin layers in a bid to further avoid cracking issues. The two "eyes" in the centre of the scene are where the trees will sit, rather than plonked in the snow as per the mk1 version there will be a bit of exposed ground cover visible. In the centre of each patch is a tube fitted to accommodate the removable trees, these extend down through the polystyrene into the MDF base. 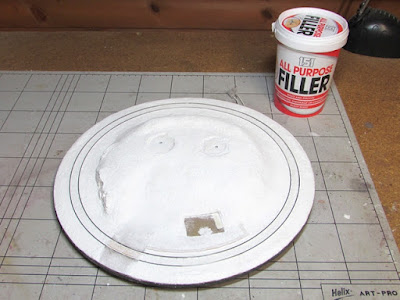 Whether applied at full thickness or the PVA mix, the filler was smoothed into place with a putty knife (or in the case of inside the circuit, butter knife...) and textured using a stiff paintbrush. A wet brush was then lightly run over the top to smooth the texture a little. I'm not sure the amount of texture is quite right in places and I may smooth any really high spots with fine wet or dry before adding the final colouring. 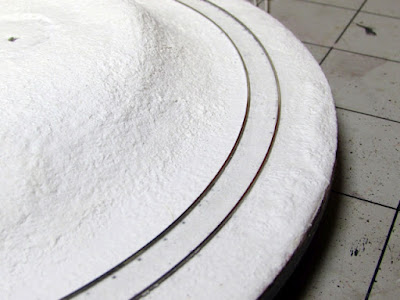 Some of the left over filler/PVA mix was stippled into the previously smoothed area between the rails which has given a much better finish in this area. I now need to clean up the rail edges and have a test run to ensure it still works! Attention will now turn to painting the Wills halt building, some fencing and the rock faces before the next stage of snow work is attempted.