Continuing the the 'Up-cycle' story is a diorama that re-uses some of the planned scenic setting, now entitled 'The Headshunt'. Whilst this probably isn't the other end of the Somerthorpe Miniature Railway, the setting is such that it can be a little ambiguous. Is this a small estate with a 15" gauge tourist railway or perhaps a corner of a 15" line built on an old Great Northern Railway trackbed?

The new name actually came from a day spent volunteering last weekend on the Sherwood Forest Railway, where I was privileged to have a root around at the far end of the line and even take the works train right up to the end of the line. By incorporating a dummy point to mark the end of a loop into the scene makes it clear that this isn't just a siding.

The diorama board seen under construction in the previous blog update is seen here with construction moving on. I added a layer of foamcore to the plywood and once dried glued the track into place, followed by various sections of card to raise the ground level up to sleeper height. Generally speaking, cream mounting card will be hard surfacing, the brown card soft: 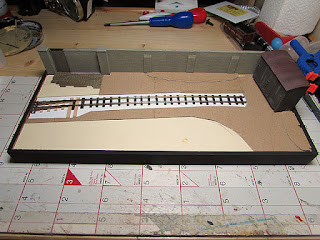 A close-up of the van body and wall.  The Peco van has a corrugated iron roof and is weathered to represent a well-worn, flaking (in places) finish.  The walls have been painted to represent a cream/yellow brick effect: 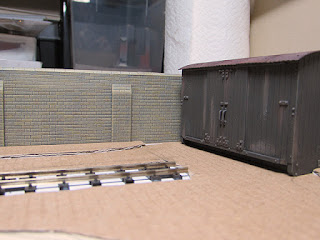 At the other end of the scene I have added some Wills (4mm scale) setts in the area that represents a long-bricked-up gate, these must have been there a while and they will be partially buried in later surfacing: 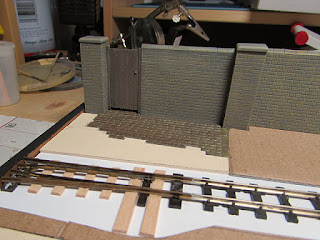 The next step is to add some track detail, dummy fishplates etc (and some spikes on that dummy turnout!)

Colin
Posted by Colin Peake at 22:39 No comments:

As hinted previously, things have been rather quiet on the ‘Up-cycle’ front lately due to an emerging view that the work so far is a step on the path rather than the destination itself. I'm not sure what has provoked this change in thought, but I suspect it is fuelled by a feeling that ‘Up-cycle’ was really just that little bit too small to be a layout itself and perhaps too big to be a diorama.

Although ‘Up-cycle’ was built with (and fulfils) the dual purpose of fitting onto my already cramped desktop and storing in an impossibly small slot, in practice there is a rather cumbersome movement between the two. Since the re-purposing of the scheme as a dual identity test track/diorama scene I've actually started to wonder if I have made a compromise too far and whether the best outcome is in fact to split these two purposes apart and make some further steps: 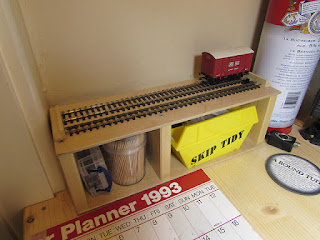 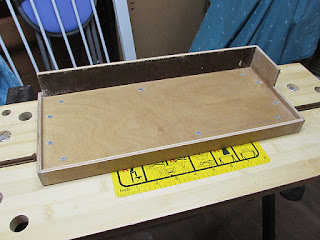 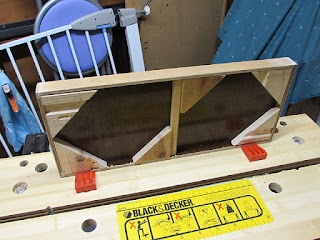 The only real loss here will be the length of the track available for ‘play’ purposes but I get the feeling that in the genuine spirit of the project, the potentially redundant board could easily be “upcycled” itself. Although built to fit in a limited vertical space there is every possibility that it could be extended upwards with higher backscene boards and indeed outwards if required to add depth. Alternatively, it could make a useful fiddle yard run-off for a larger project…

The 'Festival of British Railway Modelling' last weekend in Doncaster produced a first for me - the purchase of an O9 kit from a manufacturer at a (very) mainstream event! It was good to see John Flower of A1 Models back behind his stand and he was happy to sell me his the latest version of the O9 loco kit, a reduced height version more suited to a 15" gauge passenger carrying railway. 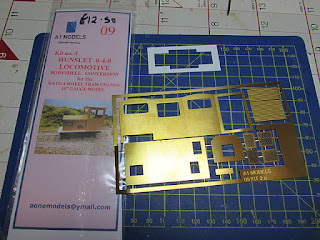 Things have been rather quiet on the 'Up-cycle' front lately. The board sits unchanged and although the scenic features are slowly being painted, there is a dawning view that the work so far is a step on the path rather than the destination itself. I will expand on that idea another time after some further thought and experimentation has taken place...

Some trains are made to be played with...

Last year I received the gift of a handful of tinplate OO gauge wagons as a wedding anniversary gift/joke from my wife.  Do what you want with them she said...

I'll be honest, tinplate is not really my thing, but I gave the contents of the box a good looking over to see what could be done.  First impressions weren't good, but the closer I looked I realised that two of the wagons weren't tinplate at all, but litho printed card overlays on wooden bodies, with cast metal chassis. 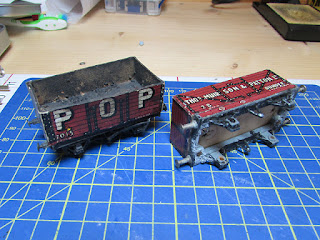 They are certainly not the best examples of the breed and I suspect have no heritage value, but the mazac cast chassis of the one on the right looks like a potential 7mm scale narrow gauge underframe to me.  The one on the left is very curious, cast whitemetal with rather fine wheels (though on plain-end axles), but the wheelbase is 35mm - that's 10 feet in 3.5mm scale rather than 9 feet in 4mm scale - is it actually to HO scale?  The body is rather warped and appears to be some sort of fibreboard in places rather than wood. At some point I'll try and use the useful bits of these wagons.

The Hornby Dublo wagons were very battered, this brake van is typical: 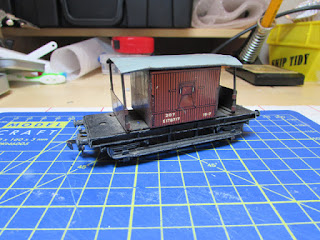 The eagle eyed will notice the rather shiny wheels, they are modern Hornby examples!  As the body on this was beyond repair they have been reclaimed for the spares box, the chassis frame may go on eBay as a spare....

A totally non-conservation approach was taken to the best of the battered tinplate wagons. Two open wagons became one (more modern Hornby wheels reclaimed); I swapped some other wheels about amongst the interesting 2-rail conversions and the oldest length of Peco Streamline track I could find seemed apt for display: 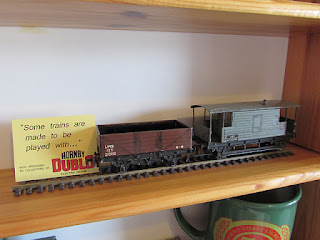 Colin
Posted by Colin Peake at 21:15 No comments: