The Road to Hull (alternative title: Keep You Motor Runnin')

With less than a week to go until Shifting Sands appears at the Hull club's Summer Show, I thought it worth showing off a few new details that I have added to the layout for this appearance.

The first is a Harley Davidson 'Heritage Softail' motor cycle. This is from a range being sold at shows by A1 Models, moulded in plastic and if I recall correctly are left-overs from a promotional collection. With a little work to lessen the appearance of mould lines on the chrome parts, some touching-in of paint, a coat of matt varnish and a gentle touch of dry-brushing it is ready to go on the layout: 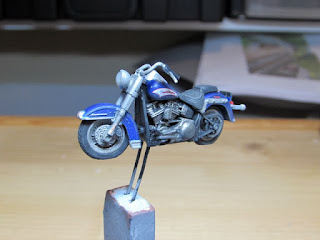 I have added the pins underneath to enable it to locate on the layout, you may also just see that I have flattened off the base of the tyres so that it sits more easily on the ground. On the rear I have added a licence plate from Tower Models 4mm scale bus decals, with a little tinkering a 1970s mark becomes something that the DVLA has made a little money from: 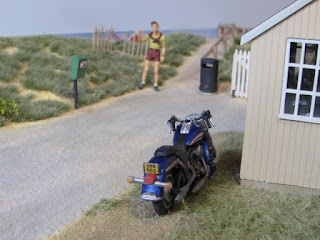 This isn't the only scenic addition. I have also added and moved around some of the items in the shed area, a bit like real life really! In the workshop can be glimpsed some new items in the form of the wheelsets and pillar drill I made last year, plus a coat hung from the shelf bracket that dates from the same time (the drill sits on wooden blocks awaiting further use, they aren't using it on the floor!): 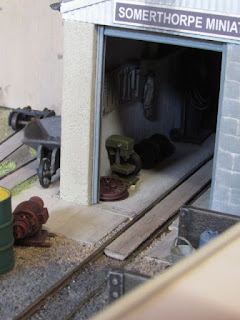 Another item created last year was a locomotive cab, which has been added to the area of junk near the front of the caravan, along with one of the containers displaced by the new items in the shed: 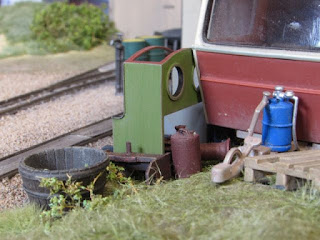 I look forward to meeting O9 Modeller readers at the show on Saturday 3rd June.

Colin
Posted by Colin Peake at 14:53 No comments:

Just a quick glimpse of the main structure for my 009 project, a conversion from the Wills 'Station Garage' kit into an office and workshop, with a few added parts. I was surprised to see that the instructions for this kit are dated 1979, so it's been in production nearly all my life (but at least the mouldings are still sharp)! 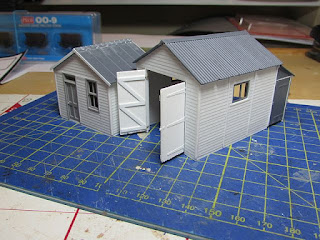 Colin
Posted by Colin Peake at 20:46 No comments: