As promised, here's the driver for SMR no. 3, with his topical Movember 'tash keeping his upper lip warm: 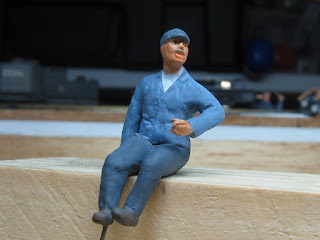 He's a mix of Preiser parts, mostly from the Luftwaffe ground crew set, but with one arm from another figure.  The basic limb set-up dates back a couple of years but all the detail and finishing is new. He was painted in record time, completed in one session rather than the spread over several days approach I usually take with multiple figures in paint.

In fact, his Mo almost looks better in pictures than mine! 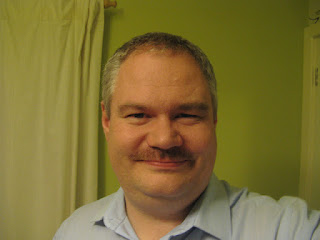 ....your time for overhaul is here!

You have to feel a little sorry for nameless SMR no. 3, clearly the workhorse of the fleet with a somewhat up and down existence, as the pictures below will show.  The Kato chassis underneath is often borrowed to try under new build locos, and quite frankly the cracks were starting to show, especially one in the main frames. A long overdue overhaul was in order, but first, a history lesson from the 'Shifting Sands' archives.

No. 3 (because it was the third O9 loco I built), came into my hands from Clive Mortimer, a well known scratchbuilder of 4mm scale diesels, many of the rarer designs that the ready-to-run manufacturers are only just starting to see the benefit of.  Clive had visions of the 'Great Ouse Valley Railway', a Romney style outfit in the east of England.  This loco, and several coaches, were the only manifestations of it in O9, but he later restarted work in 12mm scale on OO gauge track.  One day his vision may come to fruition!

No. 3 arrived without any form of chassis, and I quickly put together a frame to fit around a Roco HOe mechanism.  I had to add bonnet side extensions to cover the motor: 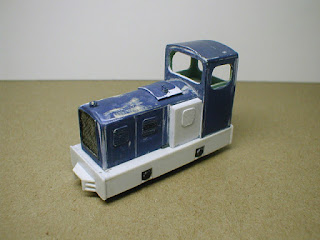 Painted bright yellow, the loco gained the nickname 'Yellow Perril', hardly original but it suited!  There then followed my period of O9 indecision, where I almost gave up, started making static models and dioramas, then changed my mind.... By this point, I had altered the side frames to show the Roco ones underneath, but the chassis moved on to another loco (as seen here), and a dummy chassis featuring 4mm scale wagon axleboxes was built.  A bit Lister-like if anything: 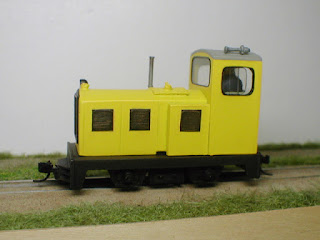 After I had restarted work and was planning what became 'Shifting Sands', the loco had fallen into disuse and was eventually given an rebuild that featured many new parts.  The chassis frame was from Knightwing components (and had been built on-spec for another project), whilst the cab sides were a pair built initially for 'Jay' but replaced on the final model.  At this stage only the bonnet front and top, cab front and rear are the original parts, the rest was new build and replica: 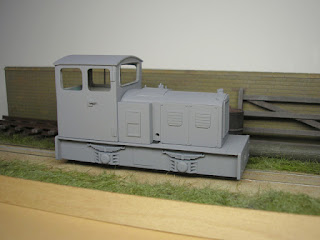 With the varnish yellowing the coat of blue paint worn after the rebuild, and the cracked frame to repair, it was clear that the overhaul would need a repaint to go with it.  What was unexpected was that the cab would be modified again to an open doorway, inspired by 'Redgauntlet' at New Romney (which I suspect inspired Clive in the first place).  So here we are, awaiting the paint shop, where the colour will again be blue but the shade darker, pretty much the colour she arrived in: 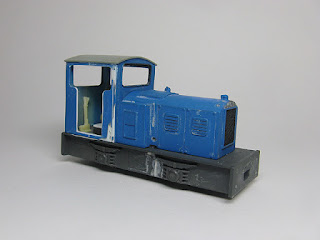 Opening the cab up meant a new interior and new driver, as the old one had been compromised to fit over the Kato chassis.  I'll get a picture of the new recruit (the usual Preiser airman mash-up) posted soon, but needless to say, with it being Movember, he has a 'tash!

Colin
Posted by Colin Peake at 12:08 No comments:

I don't normally write about non-railway things here, but for a change I thought I would....

A group of Gents in my workplace are supporting 'Movember' this year in support of one of our colleagues and men's health issues in general. Now I'm normally a clean shaven sort of chap so this is something of a novelty for me, especially as my plans for a pair of Bradley Wiggin's tribute sideburns were vetoed over the summer.  So here we are, eight days of continuous growth (I had to start properly on the 3rd due to a family photoshoot booked some time ago): 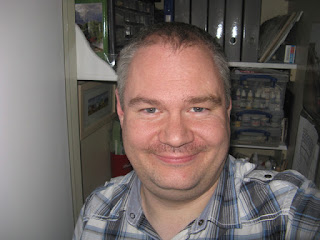 Not to be left out, the little chaps in the railway cupboard have got involved.  Following a suggestion by a Mo-Bro at work that "before you paint that train, put a moustache on it", the chief engineer, himself a moustache grower, put together a headboard for the A1 Models O-16.5 loco.... 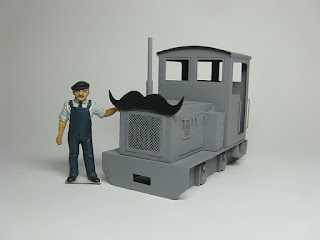 Colin
Posted by Colin Peake at 18:15 No comments: