"Madness" I hear you cry, and you may well be right, but do let me explain.  Some time ago I build a small photographic diorama that was intended to be the virtual extension of the 'Fun Land' fence that forms part of the scenic break on 'Shifting Sands'.  I spent some time stencilling the letters 'FUN LAND' onto the fence to good effect.  With the possibility of re-using this fence on another project, but having to paint out the lettering, I opted to replace the fence on the layout with the lettered fence: 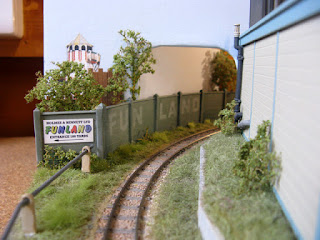 Having managed to remove the old fence andsplice in the new section, I carefully attempted to blend the colours.  There is a difference with the colour of the section that holds the sign, but that isn't really noticeable under normal conditions.  I've had to add backlighting to this shot as otherwise you cant' see too much through the hole in the sky!  The surplus fence sections, after a visit to the fence doctor, can now be re-used.

Some of you may have noticed that I re-edited my last posting here and may wonder why.  Well, I suppose I had been a bit hasty with a project and eventually realised that I had made a mistake and ended up reversing what I had done.  This is the photo that was removed: 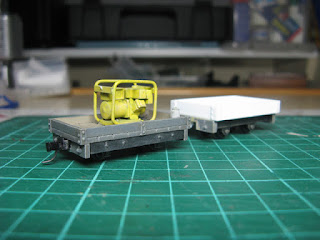 Having swapped the generator wagon body onto a new chassis and built a replacement to larger dimensions, I realised that I had made a mistake and reversed the alterations, it simply didn't look right  The good news is that the new styrene body is now taking a life of it's own with a steel framed chassis scratchbuilt underneath, riding on a Peco N gauge chassis disguised with surplus Black Dog axleboxes: 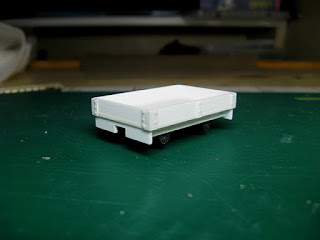 Mind you, I still haven't decided what I need all these wagons for....

Colin
Posted by Colin Peake at 23:20 No comments:

Yet again time seems to have vanished into a black hole, so here's a quick summary of the pre and post Burton developments for 'Shifting Sands'.  Overall the day at the 7mm NGA's AGM went well, it was good to catch up with like-minded O9 modellers and fascinating to see the launch of the first ever plastic kit for O9 rolling stock, from Chivers Finelines.  I'll post something about that another day, I promise!

Firstly, something  visitors to Burton didn't see.... this short length of the new Peco spear fencing appeared on 'Shifting Sands' the weekend before the show, but never became permanent.  Quite simply, despite it being a detail I wanted to add, it just didn't look right.  I think that is due to two factors - firstly it is a little random, even if it is entirely in context, secondly, three panels would probably have looked better than two, in just the same way that an odd number of coaches in a train look better than even.  On a practical note it possibly wouldn't have survived long at the front edge of the board, despite some re-enforcement!

At Burton the layout was graced by a visit from two locomotives belonging to Jordan 'Rough Shunter' Leeds, based on Ravenglass and Eskdale prototypes.  Both were built on commission by Paul Windle and painted by Ken Gibbons.  Sadly the usual 15" gauge story of coupler incompatibility made it impossible to use them in service, and 'River Mite' took objection to 9" curves.

The view above reveals some of the pre-Burton work on the layout in the shed area, the eagle eyed will see that the caravan has moved back slightly, allowing the installation of a small coaling stage and a revised mix of details.

I had promised myself no further wagon tinkering before Burton, and true to my word I waited.... I did make a couple of purchases from Steve Bennett at Black Dog Mining at the show and these have allowed a couple more wagons to be created to join those assembled after Narrow Gauge North.  It's best not to ask too many questions about how many times some of my Black Dog chassis have swapped bodies and dare I say it I have had my eyes on the Black Dog chassis under some of the 'Shifting Sands' fleet... but that moment has passed (largely after remembering Steve Bennett's compliments about the generator wagon just visible in the picture of 'River Mite') and common sense now reins .  Well, most of the time anyway....

Blimey, it's June 1st.  That means it's only a week until 'Shifting Sands' makes it's trip to the AGM and Convention of the 7mm Narrow Gauge Association in Burton upon Trent.  We have of course done this before, as shown in Mick Thornton's photo from 2007. 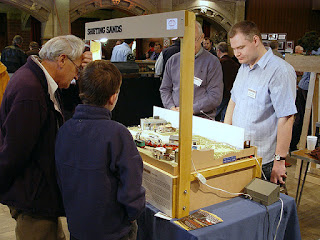 Locomotives and stock are being checked over and tested, for most of them it is a good 18 months since they were last used, and I've been able to make a few planned changes to scenic details, so please do come along and play 'spot the difference'!  There's still a little to do but hopefully things are on schedule to get the layout boxed up Friday night for the trip south.

In order to soak up some inspiration an afternoon at the Sherwood Forest Railway was in order, where a warm welcome, and equally warm sunshine, were available to allow some photography and several train rides.  I do sometimes miss the immediacy of my old Fotopic websites to record days like these, photo-only content doesn't always work with blogs and Facebook uploads seem to get lost in the ether of time.  Sites such as Photobucket or Flickr don't allow the level of control over the page appearance as Fotopic did.... 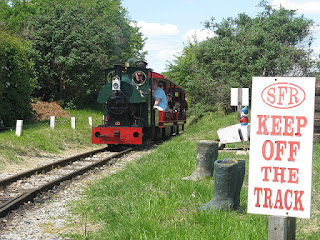