Here's a corner of Shifting Sands you don't see very often, the "hole in the sky"! 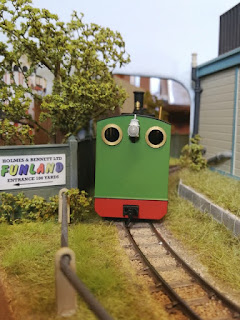 'Flower of the Forest' was in the process of checking the clearances under the new Funland tree. Despite it being clear enough a bit of extra clearance was made by a miniature tree surgeon equipped with a pair of nail scissors!

Not long now until the layout appears at the 7mm Narrow Gauge Association exhibition in Burton upon Trent - 8th June.....

Colin
Posted by Colin Peake at 22:34 No comments:

With 'Shifting Sand's trip to the 7mm NGA exhibition at Burton-on-Trent on 8th June getting ever closer things have swung into action to ensure it is ready for action. Having extracted the layout from the storage box and noted a few jobs that need doing, the first job was an electrical "test", the newest O9 stock having a quick run around before I managed to snatch this picture on my phone... 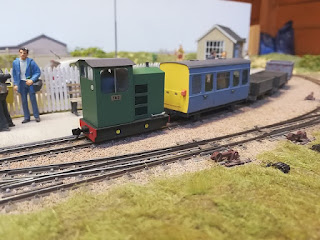 One of the noted jobs was that a seagull had apparently attacked the chap in the blue coat...

Short bursts of work were then the order of the day over the last week or so. Having proved that everything worked, I opted to do all the required scenic works before a final clean up, track clean and re-graphite, and then and extensive test-running of all required stock, pencilled in for bank holiday Monday.... 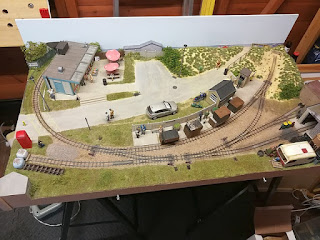 It doesn't really look any different, but at least the niggles are being ironed out!

Colin
Posted by Colin Peake at 21:31 No comments:

The Beck Bridge - Flowers and Fences

A few hours on Saturday morning saw the Beck Bridge diorama really come to life, with the fixing in place of the concrete fence and scenic treatment around it, plus various extra bits of plant life added to the scene. I am now at a point where I can consider it completed, but in no way finished as there are a few items to add that are still in the works. 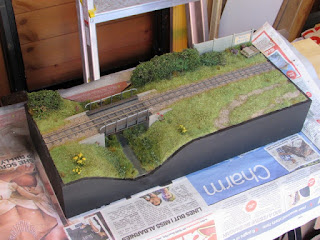 The yellow flowers are MiniNature products whilst the red and purple ones are Noch/Gaugemaster laser cut examples, some of which were interesting to extract from the packaging in one piece and one particular plant end up being used in smaller pieces in several places, which has actually been quite effective. I've also experimented with the Peco brown grass tufts, cutting small sections off to add into the grass areas, then cutting them about a bit with nail scissors.

The static grass tufts have had a dry-brush with a grey-green colour to remove the shininess and tone the colour down a little and I've also used weathering powders to add some more tones to the ground cover, notably the track and ballast. 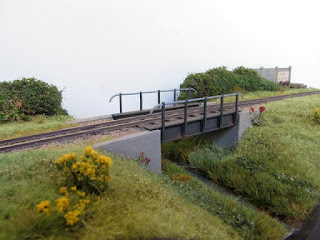 The eagle eyed will see that the fence hides another seaside attraction, the Model Village. The sign was manipulated from a photo found online, printed on photo paper and then sprayed with matt varnish. I then distressed the edges and corners to make it look like it was painted on plywood and de-laminating. The pile of junk in front is not secured in place and is just a test to see what works there, the area looks too empty without anything but I don't want to overcrowd it. Maybe a stack of new sleepers might do the trick? 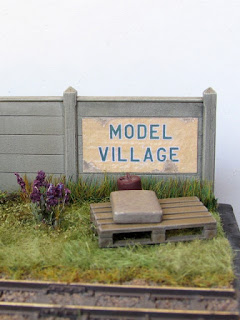 Thoughts then turned to how to store the diorama and as I have tentatively said it will accompany 'The Old Quarry Line' for an appearance in July, it needs some form of box. Not wanting to go to the extent of a hardboard/timber cover I have opted for a cardboard box modified to suit, the idea being that it will then sit in a stacking crate. Having appropriated a cardboard box that a computer monitor was delivered in, I cut it down considerably in height and also cunningly reduced the length to that required to fit the diorama. Bubble wrap both protects the diorama and also makes a convenient way to actually remove it from the box! 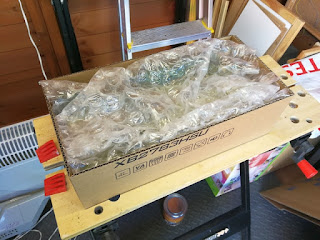 There﻿ will now most likely be a short intermission in progress as I need to get a certain layout ready for the 7mm NGA show in Burton....

Colin
Posted by Colin Peake at 20:51 No comments:

Bank holiday Monday saw me take a little time to devote to creating bushes. These use rubberised horsehair as the basis, teased out and shaped, then sprayed firstly with hairspray to make sure it was sticking together, then matt brown aerosols (Halfords and Humbrol) to give it a natural colouring. Foliage mats from both Woodland Scenics and Skale Scenics were then used as the initial covering, followed by a blend of finer scatter materials, using some of the same colours as used in the grass to maintain a degree of tonality. 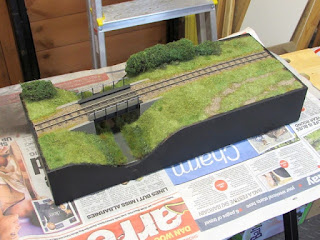 The bushes have been positioned and stuck in place with plenty of PVA, aided by some strategic upright pieces of cocktail stick spray painted brown to blend in. At the far end space has been left for some fencing along the back edge. This will be the three panel length of concrete fencing initially put together for the micro-diorama created a month or so ago. 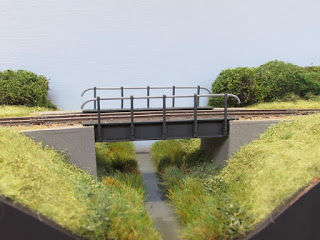 Studying the image above something was troubling me about the bushes and I realised that it was their neatness, as if they had just been neatly trimmed. I therefore opted to add some extra material sticking out from the basic shape of the bushes to add some extra texture. The extra material was created from sea foam (actually recycled from the winter diorama), sprayed with the same two shades of brown used on the horsehair and when dry sprayed with hairspray and the same scatter mix used on the the main parts of the bushes. Fixed in place with PVA they really make a difference. 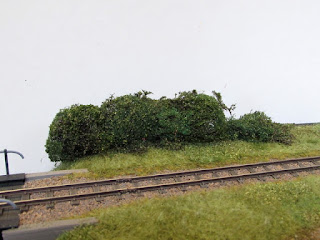 In the back left corner of the scene I have added in a raspberry bush from the Tasma Products pack that I used on the Old Quarry Line. Although sold for HO/OO it has worked well in 7mm scale﻿.﻿ 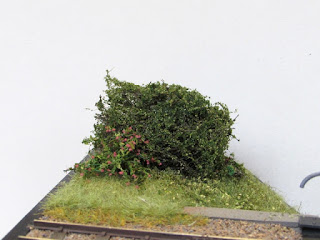 Of course, in the long run, this will all be in the background! 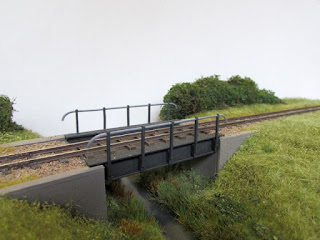 Having worked steadily on this over the week the diorama now has a full covering of basic grassland created using hanging basket liner material. In the process of doing so I have created a step-by-step guide to using the material - 15 Years of Hanging Basket Liner Grass. 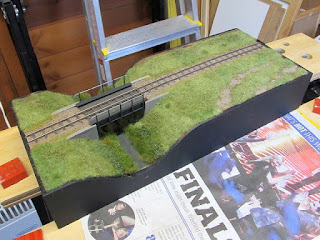 There's plenty more to add, I'm planning bushes and fencing along the rear edge plus there will be some laser cut and MiniNature flowers added as on the smaller diorama completed last month. It is certainly coming together well and a far cry from the cat food box! 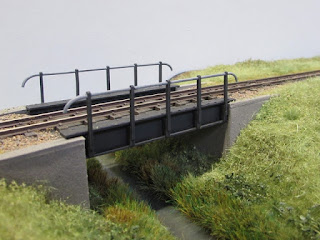 In several areas I have used hairspray sprayed through simple newspaper masks to add extra texture using fine scatter material/ground foam scattered though a sieve. I have been careful to choose colours that blend well with the tone of the grass ma﻿teri﻿al. What is interesting is that I'm finding as I go through my ground foams etc I find more and more in shades of green that I do wonder why I bought them in the first place, is it dodgy exhibition lighting, or a change in my taste maybe?