Something was bugging me about the 'Beck Bridge' cat food box diorama... I liked the concept but what wasn't working was the practicalities of what the diorama would be useful for, or how it could be stored. It wasn't going to be much use for photography as the bridge handrails were central and got in the way, and it couldn't be displayed anywhere as it would be too vulnerable to being knocked etc.

So I had a rethink and vanished off into the workshop.... 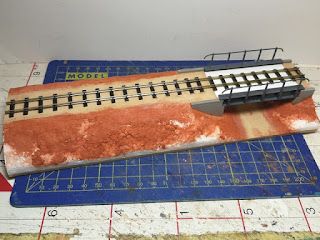 Apart from the bridge it is all new material. Well, I say new, leftover 3mm MDF forms the base, with a frame of 12 x 21mm timber leftover from the box build for the 'Old Quarry Line' along the back and supporting the bridge/trackbed (more 3mm MDF). More offcuts of polystyrene form the landscape with a healthy dose of DAS modelling clay to blend it all together. The concrete bridge abutments are from 'Fab foam'.

The track is Peco, when I laid the Pizza layout at new year I ended up with a lot of individual sleepers due to the way I cut up and manipulated the sleeper base, so I have used these sleepers with all the webbing trimmed off and the ends squared off. The ones on the bridge had extra treatment to further neaten their edges as there will be no ballast at this point, in the manner of the bridges on the (now closed) Markeaton Park Light Railway.

This new version of the scene will both fit in my display cabinet and allow stock to be displayed without the bridge slap bang in the middle!

The Beck Bridge - a new diorama

Before Christmas I posted about a diorama built using a cat food box and polystyrene. I had a vision of using similar methods to create a scene of a 15" gauge line crossing a beck on a girder bridge and I started work on this on New Year's morning. As I didn't have as much polystyrene to hand, but plenty of cardboard boxes to dispose of, I actually filled the bottom of the box with layers of card cut to be a snug fit. 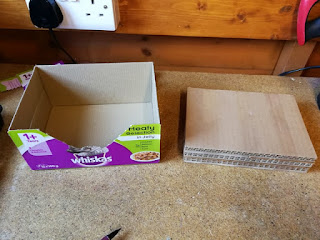 I actually sellotaped the layers together and then glued the whole block to the base and sides of the box, making it quite strong. I used some chunky clamps and a piece of plywood to make sure the box sides didn't bow out and actually stuck to the inner card layers. 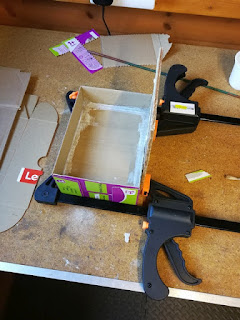 The following day I inserted the polystyrene layers and blocks built to allow a valley to be carved out. The clamps and plywood were used again to make sure everything stuck all around. 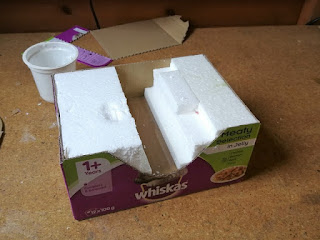 I added some 3.5mm foam core into the gap at the bottom of the box as a potential future watercourse, and carved the basic shape of the landform into the polystyrene using the existing opening as a guide. 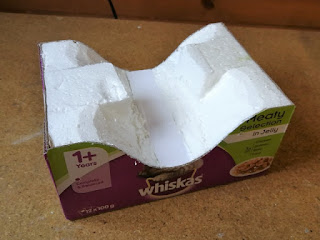 However, something didn't look right and I mused over this for a day or so. I then removed 1/2" of polystyrene from the top of the box, re-shaped the slopes to a more gentle grade and slightly reduced the angle (and size) of the bridge abutment supports. ﻿I﻿ think this improves the overall balance of the scene. 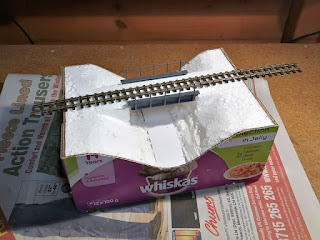 The bridge is a modified Wills SS28, with the lower handrails removed from the girders to look like a lightweight 7mm scale bridge suitable for a 15" gauge railway. I will make new abutments representing cast concrete, as the basis of this I added cardboard uprights to the abutments to make the bridge deck fit snugly. 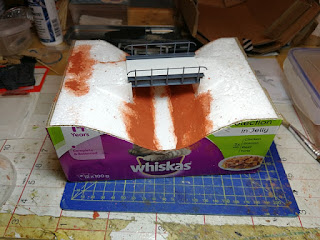 DAS modelling clay has been used to shape the bottom of the embankments as they were not easy to carve from the polystyrene. Once this is dry the ground cover can be started... watch this space...

Colin
Posted by Colin Peake at 21:45 No comments:

Over the Christmas and New Year break I had set up my 009 layout 'The Old Quarry Line' on the workbench as something to sneak away and run a train on if time allowed. Which it did, and would often lead to a request from the smaller members of the household to see a "choo choo" running.

Imagine my surprise when the requests continued after the layout went away, so I hatched a cunning plan and rang the local take-away....


...who couldn't help so I retrieved a pre-prepared base from the workshop and added Peco 009 'crazy track' as a topping... 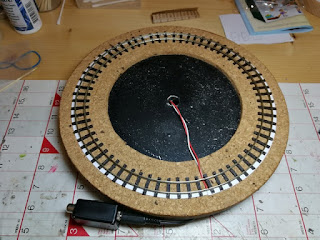 In what is probably a micro-layout first the basis of this is a 250mm disc of 6mm MDF that first saw use as a canon wheel (the barrel of which was 3" downpipe!). During one of my periods of doubt over the 009 project this was given a square frame of 12 x 21mm timber underneath and a ring of cork on top, before being left to mature. 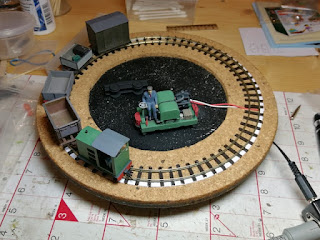 The rails were removed from a yard of Peco track and bent using a home-made rail bender made from three screws and a piece of wood, as advised on the Gnatterbox many moons ago. The sleeper base was cut up and reassembled with all the joins between sleepers on the inside of the curve. This was then laid using a home-made 4" 'tracksetta' style template following a pencil line drawn using a compass, with a slither of card under the outer rail to provide basic superelevation. The whole layout is just one piece of track, wires were pre-soldered to the last two rail joiners I had in stock - luckily everything went to plan!

Extra toppings will be decided in due course....

Colin
Posted by Colin Peake at 19:59 No comments: