A month or so ago I made mention of creating further micro-dioramas of a similar size to the abandoned coach scene, i.e. 140 x 70mm. I felt this size worked well visually in my display case as some previous scenes had ended up looking too long. Having prepared a pair of new 6mm MDF bases I started to plan to build new scenes in both O9 and 1/24th, the latter to display my scratchbuilt Lister locomotive.

The Lister had previously sat on this base, which was one of the offenders on length and was taking up more space than strictly necessary: 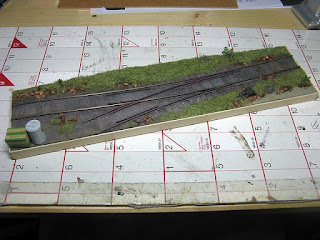 This was a rebuild of an earlier diorama, which itself was reclaimed from an abandoned 2008 project that would have seen the Lister shuttling back and forth with a single wagon (!). As it was due to be replaced anyway I opted to see if part of it could be recovered as the basis of the new scene rather than start afresh. Very carefully, having mapped out the cuts, and then carefully separated just the top cardboard layer of the foamcore board, I found that it could... 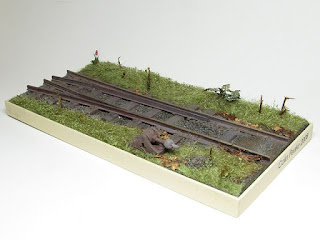 The result above shows the result after some work to make up the gaps in the ground cover, some new areas of grass from hanging basket liner, additional ground cover from scatter applied over hairspray and some grass moss strands. The existing point lever, a vintage OO gauge item, was cleaned up, Grandt Line bolt heads added and suitably painted and weathered. 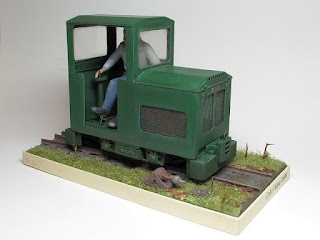 Although I have made preparations for another O9 scene it is on hold as the next project will be a reworking of 'The Path to...' to bring the textures and detail into line with the latest creations. Watch this space!

Colin
Posted by Colin Peake at 21:57 No comments:

The news came through this week that the Markeaton Park Light Railway in Derby had closed, with one of the reasons cited as non-renewal of the lease when it expires at the end of the year. It was also rumoured that track lifting would commence immediately and that a the rolling stock had been sold to a new home.

I first became aware of this line in the early 1990s as it was listed as a location of a 15” gauge railway with a Maxitrax petrol locomotive. However, it was not until a news item appeared in the ‘Railway Magazine’ in 1996 covering the change in ownership to the Bull family and purchase of an Exmoor Steam Railway 0-4-2T locomotive and coaching stock that the urge to visit appeared. This duly occurred in April 1997 and whilst ‘Markeaton Lady’ was not in steam, we were able to view it in the cavernous shed and ride behind the Alan Keef diesel ‘Cromwell’. On subsequent visits we were able to travel behind steam until the locomotive was withdrawn for overhaul and subsequently sold to the Evesham Vale Light Railway where it now runs as 'Monty'.

The railway soldiered on with the diesel locomotive ‘City of Derby’ as sole motive power, although from some of the reports of cancelled services on their Facebook page, not always the most reliable of machines! Our last visit to the railway came by chance in January this year on the day of the 7mm NGA Derby Members day, when a sunny afternoon saw us call in at the park on the return home, simply on the basis that it had been a few years since we had visited. We had a ride in the rake of ex-Fairbourne coaching stock that had always been in the shed on previous visits but we did not get to see or ride in the refurbished Exmoor stock that will no doubt give good service to their new owner.


From a modelling point of view the main station area has (had) a very modelegenic air to it, a simple loop and two lines heading into the shed, itself a remnant of the armed forces occupation of the park in the 1940s where it served as the NAAFI (and inside still had the counter and shutters to prove it). Inside the shed another point provided a third line, almost as if it were a real-life fiddle yard, enabling the railway to store all of its stock under cover with space to spare. I’ve often thought that with some subtle adjustment at the Markeaton Park setting, especially with the curve heading out of the station, could lend itself to the ‘Shifting Sands’ format rather well…

Colin
Posted by Colin Peake at 21:28 No comments:

Custom produced etched name and works plates for my Exmoor project arrived from Narrow Planet early in August, and this weekend I have finally plucked up the courage to fix them in position. I can therefore present the third Exmoor 15" gauge 'Saint'* - '[i]St Edwin[/i]'... 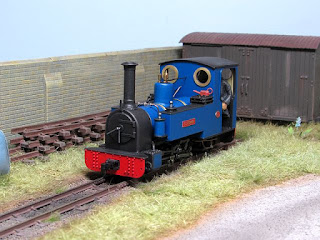 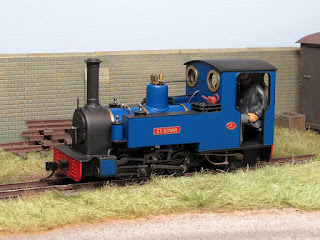 After fitting the plates using matt varnish I applied a little light weathering to tone down the smokebox, cylinders, cab roof and buffer beams and added a finishing touch of an oil can sat in one of the bunkers, something I noticed in pictures of 'King Arthur' at Rudyard lake. 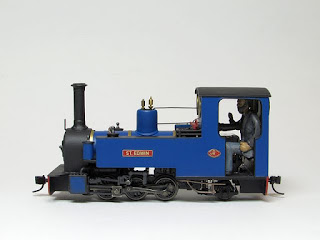 I'm really pleased with how this project has turned out, although there are a number of compromises I feel that it really captures the Exmoor 'look'. I just need to arrange somewhere to give it a good run as 'Shifting Sands' is in storage...

*following in the footsteps of 'St Christopher' at Bressingham (ex Windmill Farm) and 'St Egwin' at Evesham Vale.
Posted by Colin Peake at 20:03 No comments: