After weighing up the options for the new desktop test-track outlined last time, I opted to keep it  simple, with the two siding, 4-4 capacity version. This keeps everything very simple and actually looks quite spacious. Using materials recovered from the previous version the track has been laid and the point wired for frog polarity switching via a slide switch. Other wiring is a temporary setup until the fascias etc are added to the board. 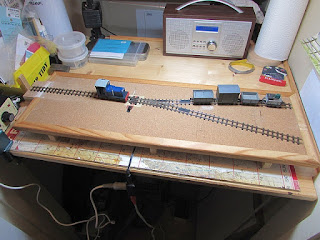 MicroTrains uncoupling magnets have been added to both of the sidings. Having experienced issues in the past with the standard length of the magnets matching wagon length making it tricky to re-couple beyond the magnet, I have followed Michael Campbell's example and split a magnet in two by holding it in a vice and giving it a (less than) well aimed tap with a hammer. The resultant less than perfect edge will be hidden as and when scenic treatment is considered. Yes, it is likely to become a scenic test track over the coming months... 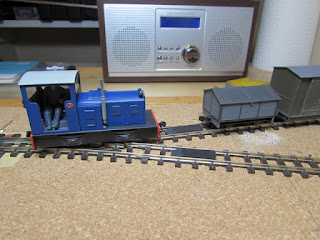 You may notice that not all of the track pins are fully tapped in place, officially this is to allow for track adjustment during testing, however there is also the small issue of the board thickness being a couple of mm less than the length of a Peco track pin!