I haven't managed to get much modelling done over the last couple of weeks, but I have managed to tweak the 3D printed K12 a little to better reflect the prototype.
Having removed the original axleboxes and smoothed away the remains I added 20 thou styrene behind the frames cut to the correct shape, and then 40 x 30 thou strip to build up the depth below the axlebox positions. The bottom of each buffer beam gained a 60 x 60 thou strip. Once set in place these items were shaped to suit and Milliput used to fill any gaps.
New axlebox and spring detail is formed using various sections of styrene strip, the springs being much thinned down rod. I did try to scribe a spring effect onto this before cutting but it remains to be seen whether this will actually show up. 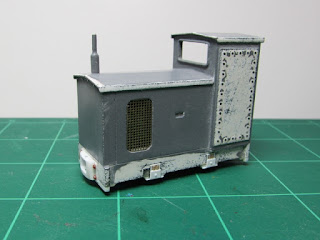 The grilles caused some fun and games as I initially thought I had no suitable square pattern material in stock. In the past I have used old sections of A1 Models chain link fencing etch for this but had nothing the right size in the usual place. Thinking that I had some fresh pieces in my 4mm scale scenic stash I was stumped when I couldn't find them, it was only when locating the diamond pattern etch I'd used on my 1/24th Lister that eventually found the spare length of fence!
The coupler blocks that I created a few weeks ago by laminating together styrene sheet and strip have been located at a height to suit MicroTrains couplers. They are drilled to allow a 1015 coupler to be secured with a screw from underneath. Bolt head detail is from EDM Models 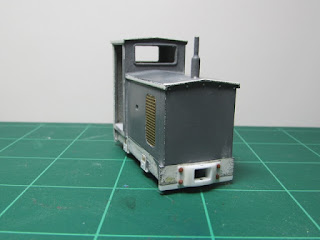 On the front end I have added slithers of Plastruct hex section to represent the bolts at the top of the bonnet front.
At this stage rather a lot of paintwork had been rubbed back, and I did have a concern that in places the primer had not adhered to the rubbed-down factory finish. Several edges saw the paint chip away all to easily... After a good scrub down I applied a very light coat of primer as a proof coat and also in the hope that it dried better as a thin coat. After a few more adjustments another coat was added and the end result was this. 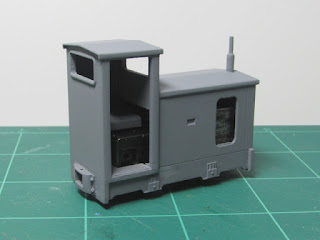 It's a bit rough in places but it will have to do, and hopefully painting and weathering will distract the eye a little. I've now given it a rub down with 1500 grit wet and dry in preparation for a sprayed coat of green, I've chickened out of Keef factory applied orange! 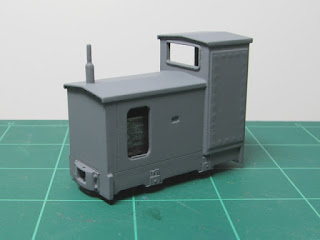 If you fancy an O9 K12 yourself, A1 Models have the print listed on eBay here...
Colin
Posted by Colin Peake at 10:03