No, I haven't added an extension, but I have been doing a little work on the Beck Bridge over the weekend, including moving the fence at the right hand end to a different angle, just in case I ever add a backscene with a curved corner... I've also picked up a couple of new scenic products at recent exhibitions and have been carrying out a few trials, some which have now manifested themselves as new additions to the diorama. 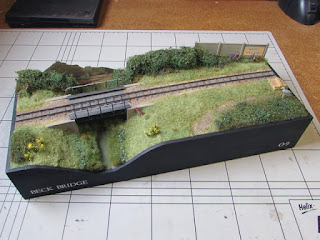 I've added new areas of brambles to the front of the scene, the idea being to make the scene look less 'square' and less flat. Having seen mention of using the "other" sort of Hanging Basket Liner in a magazine recently (the sort with a coconut mat effect), I acquired one and carried out a few tests, one of which has made it onto the scene at front left, whilst the larger area on the right has been created in situ.

The 'raw' coconut effect liner is seen on the left, I have started to peel the bulk of the material away from the adhesive coated backing part. I then teased/spread the fibres out a bit and sprayed with hairspray to hold them together. The piece on the right has then been sprayed with two shades of matt brown aerosol (Halfords dark brown and a lighter Humbrol shade). 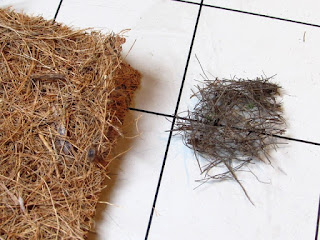 The painting stage is entirely optional, I think going forward a mixture of painted and unpainted pieces might work (along with adding a second layer here and there to add more height).

The pieces on the diorama were then glued in position with PVA, this is one of my test pieces sprayed with more hairspray followed by foliage fibre (Woodlands Scenics) and then coated in hairspray again and various shades of foliage sprinkled on. 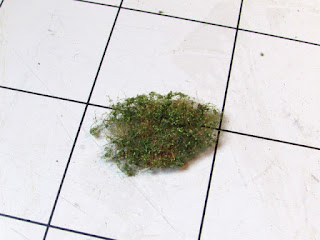 Whether created on the bench or in situ, I've used two shades of foliage fibre from Woodland Scenics and Hornby Skale Scenics, then two different types of foliage sprinkled on over more hairspray and then some coloured scatter added to give the effect of small wild flowers. I've also added short lengths of stalks reaching over the height of the foliage, achieved using Tasma Products 'field grass' cut into short lengths and secured with a small dab of PVA when the stalk was pushed into the main part of the undergrowth. 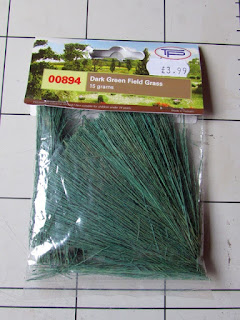 It is however always tricky to photograph scenic work... 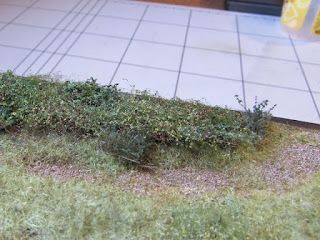 Visible to the right, and also front centre, are some Martin Welberg weed tufts, which really add to the textures in view. They come as a big pack, it should last me a while! 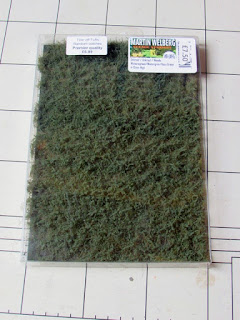 When I moved the fence I opted to remove the seagull from it. The reason for this was two-fold, firstly when I took photos of my 009 Gmeinder on the diorama last week it was clearly in view looking huge, and it was also a little vulnerable when the diorama was boxed up. He has a new perch now, observing the goings on. 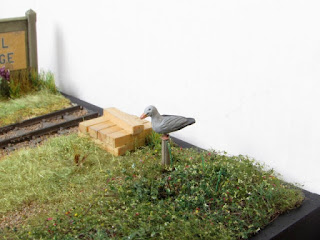 This shot actually shows the different textures in the brambles rather well, including the Tasma stalks and some Mini-nature leaves I added in small patches.

I'm still pondering adding a backscene, that also may be something "new2 for me...