A Tale of Hinge Envy

Earlier in the year, before the world of lockdown, my thoughts turned to rolling stock for a future O9 project. Whilst some existing wagons could be used, more would be required if I went down a light industrial or agricultural route. In my analysis, my usual way of wagon building had three points of time consumption:

The chance purchase of a Slaters sheet of rivet details on 20 thou styrene sheet prompted some experimentation. Using this and Slaters planked sheet the wagon body on the left was built, eliminating all three points of contention... However, it looked more like a wagon built from shed timber than planks! So the Mk2 version on the right returned to scribed planks on the sides (but retaining the Slaters sheet on the floor). 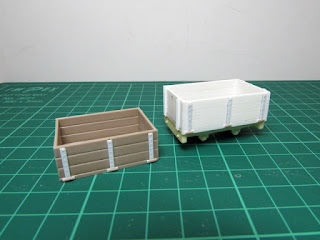 The rivet strips were cut slightly finer on the second attempt and the end result looked quite reasonable. On the ends Evergreen channel section added further relief for minimal effort. However, once painted
I wasn't entirely happy with the result, and I eventually realised why when the Chivers Finelines O-16.5 wagons became available again... very little can match the finesse of Roger's tooling on the hinge straps etc. I realised I had hinge envy! 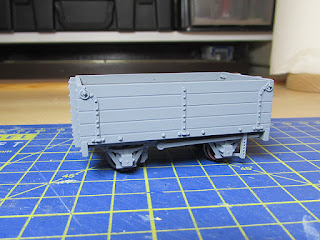 When ordering Evergreen rod for 'Wilton' last week I had a glance down the Grandt Line listing from 7mm NGA sales and found some 'Engine House Door Hinges' (ref 3524). A quick Google confirmed that they might fit the bill with a bit of adjustment so a pack was added to my order. A Mk3 wagon body was assembled, and I took the opportunity to put a new blade in my scriber for the first time in a while, which has improved the plank lines compared with the previous build. 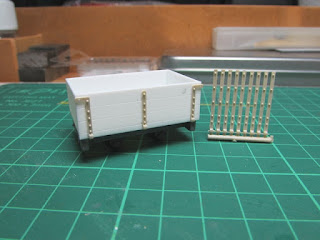 As the photo shows, I've shortened the hinges, and then carefully recovered the top two bolt heads and fixed them in new positions. I've also added the redundant top sections at right-angles to create the point at which the sides will be secured in place. I opted for some simple extra hinge detail added from 10 thou styrene strip and some rod through the hole of the moulded hinge. Simple pieces of bent 0.5mm wire represent the locking devices for the doors, I had started making something much more complex but decided to keep it simple. 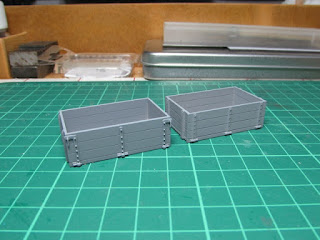 After a coat of primer I was impressed with how the hinges/straps looked. As and when wagon production is decided upon the Mk2 version will be upgraded to match, it is 0.5 mm narrower but that will add some variety, as will differing hinge details and end supports etc, with the aim that there are a group of similar, but not identical wagons.
Colin
Posted by Colin Peake at 18:30