In my last posting about a potential plan to extend 'Beck Bridge' into a thin micro layout, I was torn between hiding a sector plate off-scene to close off the loop or making it a scenic feature. In the recesses of my mind another idea from Neil Rushby came back to me, from an article in the August 2008 Railway Modeller called 'A Scenic Sector Plate', about trying to hide a sector plate in plain sight.

The Ministry of Daft Ideas now seems to have developed a 3D visualisation department complete with a suite of items for planning purposes to see if this could be applied to the Beck Bridge rebuild. 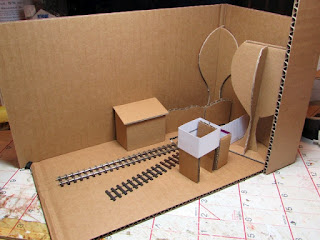 This looks quite effectively hidden but not as cramped as when I mocked-up a hole-in-the-sky hidden version. Whilst the sector plate is aligned to the back road (which would be the "normal" position) the water tower hides the fact that the front line is disconnected. The structure alongside this is nominally styled after a phone box but could equally be a portaloo or even the TARDIS...

From the wider angle the result is also reasonable. 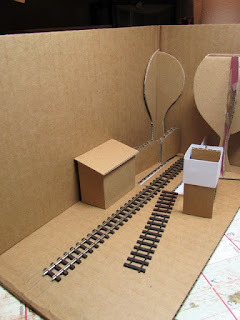 This is all working towards the formulation of my plans, there may be a totally separate 'Plan B' to also consider but that is currently an un-developed theory!